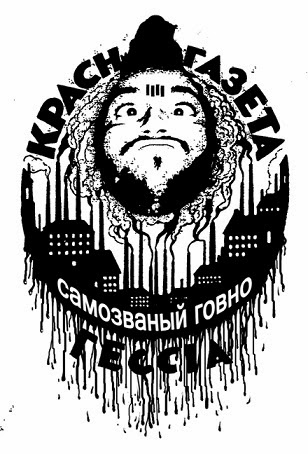 IllustreFeccia is one of my friends. This is why it is quite difficult to write about his work. We both gravitate around The Minesweeper Collective. Both, I think, we find there what we seek: freedom and open-mindedness, lined with dynamism and essential rigor that usually are never conciled in a collective (and we have to pay tribute to all those amazing people who welcomed us, including Camden McDonald who initiated the project, Niccolo Bruni and Andrew The Terror that support it daily head-on, and obviously Kevin Seven who strives every moment to make it grow).
We are both quite similar. Illustre Feccia is ambitious as I am; he is voluptuous as I am, he can hardly bear annoyances and refuses absurd constraints. He is sensitive. He is à fleur de peau (on edge). In addition to having a boundless generosity, as Italians often do.
Much has been written in the few articles devoted to him about his influences and references. It is quite clear that the punk universe, expressionism (Beckmann, Grosz, etc.), H.R. Giger, are figureheads and a base (that on which we rely, but also where we withdraw) for Illustre Feccia. But I want to focus in this small study on the underground movement of his artistic gesture.
I say gesture and I mean both the body mechanism in action (how? why?), but also, just a little behind, with the french feminine meaning of the word (la geste) which refers to an epic adventure, combat and (con)quest.
“Undercurrents” (plural form) is the wonderful name given by the Minesweeper crewto the gallery they manage at the Bird’s Nest, our favorite pub (the best) in Deptford: The Undercurrents Gallery. It is an ingenious diversion – a step aside – versus “underground”, as the Minesweeper is actually a boat… But I like to interpret it – especially – just as a movement under the surface, under the mirror (more than “behind”) under the tectonic plates. And what comes to thrill the bark and the skin…
The artistic gesture is connected with the surface, of course, but it is below references, culture, “ego” evenif it is excessive (“leaving egos at the door …” we can read on the website).
It is this underground movement, which appears differently each time on the surface, that is important in what we see – in all that we see.
And this movement is fascinating inIllustre Feccia‘sworks.
This is the line, – compulsive, generous, maniac (the maniais thedionysian madness that possessed bacchants), which just saturates the surface and inoculatesitthat expressive density. Since it is through this line, this abundance of features, that the movement arises.
Let’s make that clear: this is not a mere way of speaking. It is from the bottom of the surface that the gesture draws the traits that emerge, protrude or spring on that surface.
It comes from the lowlands, the underbelly,from the dregs and the grounds, which are not really hidden, but dense enough that nothing can be distinguished. Oil and tar. That is also why whatgushes out is still dark and stained by the expulsion gesture.

There is a clear maieutic-of-monstruosityprocess in Illustre Feccia‘s works. It is this process itself – the extraction of a hypogeal life – which is highlighted. It’s not the result that is shown, the dead foetus in its bath of formalin, the teratologicsection of the museum, no, it is the whole operation of extirpation of the swarm, with a gap on the pluck, abundant flows, fluids and tissues, in addition to faces and monsters…

The faces come from the bottom of the surface – canvas, paper or wall – and they are projected (or they project themselves) to us, to our own faces, with an almost violent suddenness. With a closeness that is not only an effect of pictorial spatiality, but also an inner proximity: like magnets, attracting monsters in our very inside (“Il bambino che c’è in te”, “The Babe that is inside you”). Illustre Feccia draws depths and backs, drags out the forces and energies that move over there.
Its name, Illustre Feccia, somehow, echoes this. Illustremeans light, lighting. Feccia refers to the vile matter, the dirty, the excrement (fex, fecis in latin), and that strikes the face – faeces hitting faces – the body and the intellect. It’s clandestine material.
Here, of course, we can connect the movement with its shape, the pattern and the theme, topics and references. It is expressionistic and it is punk. Revolt and social criticism of religions, finance, various coercive powers. This criticism works as a general denunciation of a world where many are starving when others stuff themselves, where free thought is if not punished at least limited, where we stop people from coming where we keep what we have stolen from them… This denunciation works as an extirpation and a highlighting of the profound forces, which are, after all, irrational. For it is irrational: the unreasoned energy (unreasonable?) that enables to prove undoubtedly that some socio-economic realities are unfair, everyone (yes, everyone) is aware of it, that many take offense about it, but finally it does not change and will never change anything (when we begin to want to reason about these unreasonable forces, when we try to reason them, we actually do politics; we don’t : we are inthe city: we are politics). This irrational energy, inhuman energy (in the sense that it comes from the human but exceeds him, such as single bee and swarm function differently, or – if we want to divert a Platonic reference – that a limb can’t be compared to the whole body), this energy manifests and figuresmonsters. And these representations of monsters, (everybody will agree with me on that, at least) are a true treat.
But before being political, the remarks ofIllustre Fecciaare wider: the sensitivity is involved, the sensitivity of Being-in-the-world, called – in philosophical and (it must be admitted… sorry…) Heideggerianterms – Dasein. 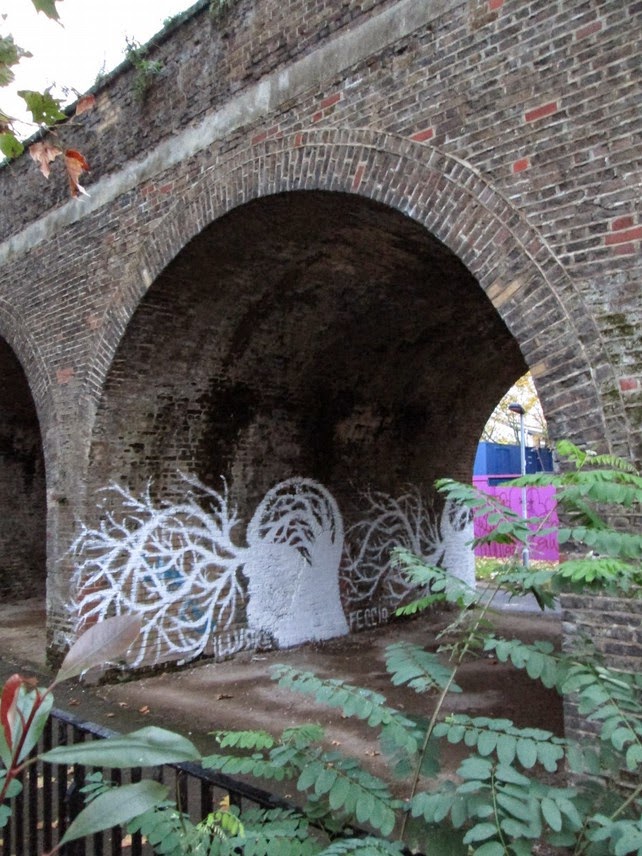 This is yet in another way, in a less superficial manner (how boring is this pseudo-political chatterin the deep squats!), thatthis gesture is political: through what we call “street art”.

Because the street art (in its best manifestations), we know, is the reclaiming of public space. The surface (the area) is large and flexible: it is no longer in his first architectural function (a wall, a door, a window, etc.), but it is diverted, re-appropriated, by humans. Better: it denounces the hypocrisy and cowardice that were used to build them. And so we can say Illustre Fecciapulls the monstruosity out of the walls. 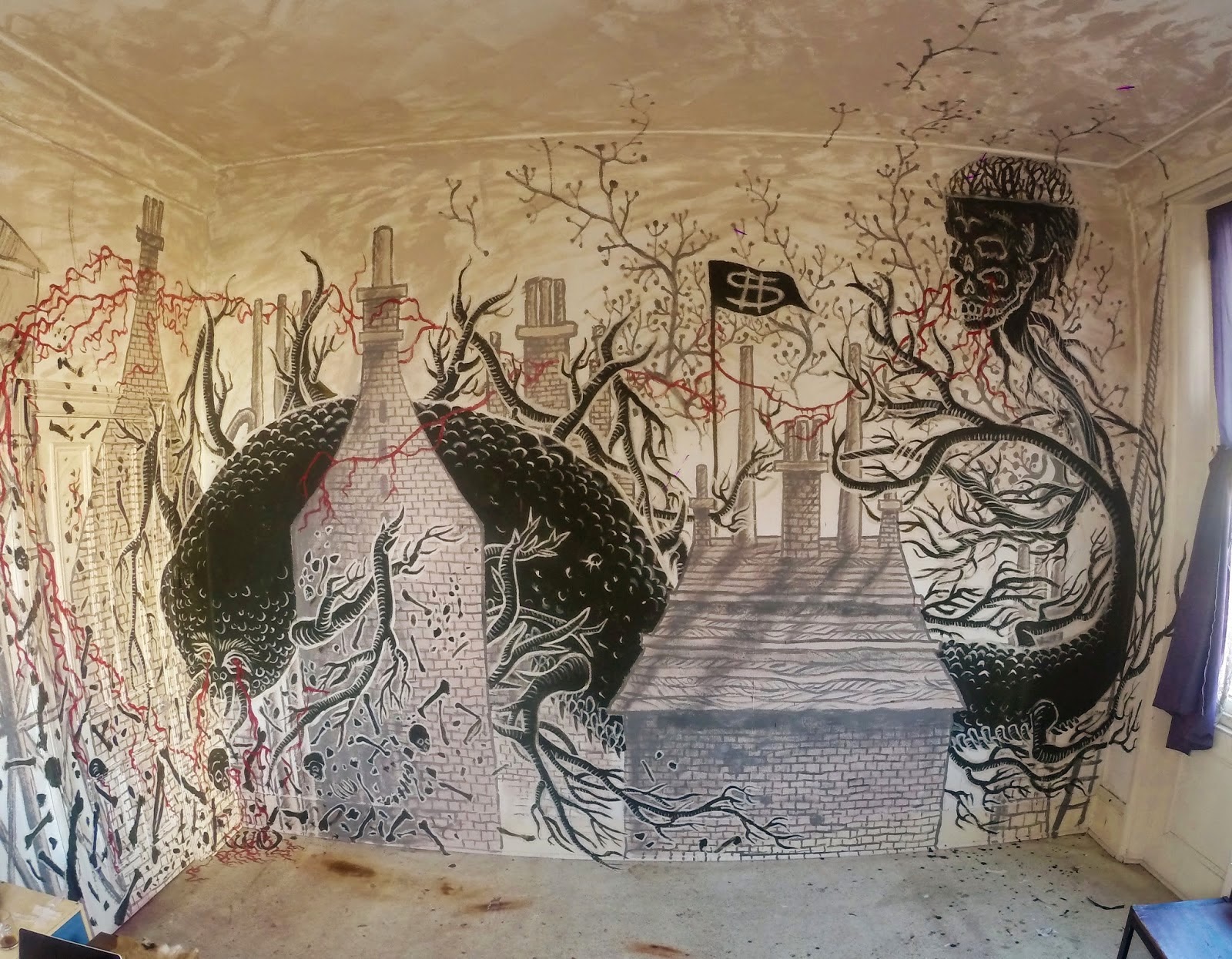 This is the immense work (Grand Œuvre) without lots of means. The artist is no longer limited to the frames, to the canvases, to what it costs (the work is also ephemeral and – more – difficult to recover), to the small surface to which it is constrained by lack of means. He no longer has to canvass the galleries and exhibition spaces, to corrupt himself: he can make the street his own gallery, as did Illustre Feccia under the arches of Deptford, following the Ha’penny Bridge. This may allow him to express himself according to his desire, without recourse to the institutions, without being stamped, retrieved, swallowed, and, in short, denied.

But it would be simplistic to make Illustre Feccia‘sart an art of denunciation, an art – only – of protest (even “beautiful” or “well done”) and even a “dark” art. Since there is also humor, as in this sarcastic figure of a spaghetti eater, and seen that Illustre Feccia (who has lived in London for many years) is Italian, I am tempted to say a Pasolinian humor, or better yet a Boccacian humor, sarcastic and satirical, that delights, as in the Middle Ages, in the pretty vulgarities and beautiful profanities. 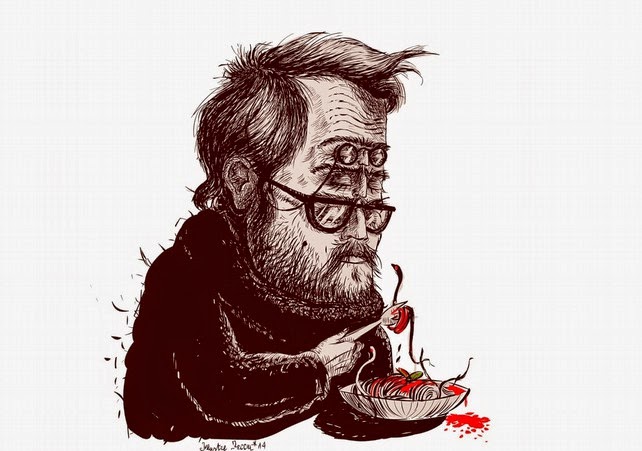 But I want to finish on one aspect of his work that I like a lot, which is quite rare and which has perhaps not been explored as well as others: delight & voluptous.
The first work of his I saw was a tribute to Modigliani, which repeated the figure of Luna Czeckowska (1919) that has long been (perhaps still is) my favorite figure by Modigliani (i felt straightaway a strong affinity between us). Her long neck and herblue eyes blurred by swoon…

It is still movement, not underground but submarine. Undercurrents less violent than in the “political” works – but just as intense. Scrolls and convolutions as they exist in beauty – that is pleasure and love. Here, art aspires to a certain harmony, which seeks to reinvent itself, made of nice quirks and intimate depths that flush, again, here and there, on the surface.
I say surface but the homage to Modigliani was painted in a basement (in Palmerston squat in Deptford), which suited it very well.
“Spring” (which also belongs to this rich magical vein inIllustre Feccia‘sworks) is the individuation of this eroticismfrom the depths: a world of roots, a hypogeous world made monad, a planet (an absolute island) but also as a fragile bubble. 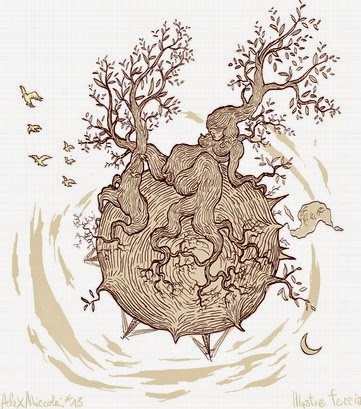 This highlightment (the exposure, the uncovering, the baring) is completely opposed to the Society of Spectacle analyzed by Debord and the Situationists. The projecting is opposed to the spectacular, the expression of inner experience is opposed to the entertainmentas well asthe cathartic event. You could say that we are dealing here with a surreptitious exposure, close to the unlawful, the illegal, the underground.